I finished writing an extension for Chrome to hide comments. I wrote about my reasons for writing it before, but even as I was writing about it I had more features in mind and a few things I wanted to change. After a few weeks of fiddling around, I think I'm pretty much done with it.

What did I learn this week?

Can't do something like this without learning something new! Here's some of the more interesting things I learned...

I generally hate regex. It's tough to understand and maintain, even for seasoned programmers, and people that do learn it sometimes treat it like a golden hammer. Yes, sometimes it's necessary - but sometimes there's a more pragmatic solution.

I needed it for this though, and the regular expressions 101 site helped me keep my sanity while I was experimenting with different patterns. It not only shows you which part of your sample input matched your pattern, but it explains exactly why step-by-step.

When you're writing an extension, the background page has no interface, so it's a little difficult to debug issues. As it turns out, Chrome has you covered. When you load an extension in developer mode to test it, there's a link opens a separate floating console window just for background page output. 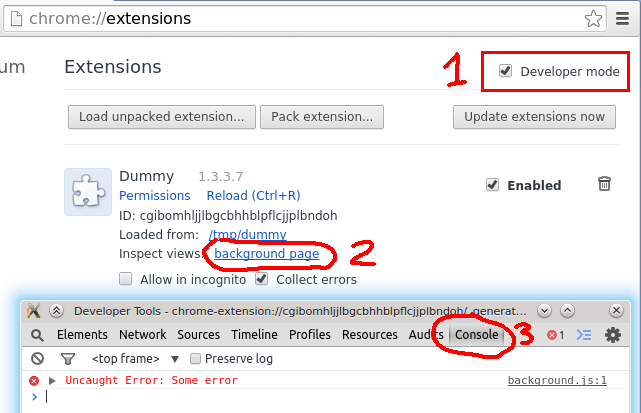 My original idea was to specify arrays of classes, tags and ids for elements I wanted to hide, and then scan the DOM multiple times looking for each one. Hopefully you can see how that's pretty ineffecient.

Then I found out about CSS selectors and the document.querySelectorAll() function that makes searching much easier. I was able to specify, in a single string, all the elements I wanted to look for.. and then just search for them all at one time.

Here's an example you can check out that shows the complexity and versatility of selectors. It selects only certain child elements within an element.

Handling delayed elements in the DOM

Did you notice the function above called "handleDelaySelectors"?

One of issues I didn't plan for right away was delayed elements. Take Disqus for example. It's possible that it isn't loaded until the user scrolls down to where the comments are located, long after the page loads. I was initially only hiding elements on page load.

Luckily I found a nice library called arrive.js, which uses DOM mutation observers to watch for elements that change on the page after it's already loaded. The following function just waits until the expected element appears (assuming it every does appear), and then stops watching once it does (that's the {onceOnly: true} part).

Opening GitHub issues via a link

One of the last things I wanted to add was a button to make it easier for users to request that a site be blocked. As it turns out, GitHub allows you to open a new issue with a link by passing the title and body as query parameters.

If you'd like, get it from the Chrome store and let me know what you think of it!

Is there anything more satisfying than sharing knowledge? Of teaching someone and witnessing their "ah ha" moment? I usually write about tech, but no promises. I hope you find something interesting!

An Erlang snippet for easily concatenating binaries and strings

Week in Review - Disabling a popup at runtime, Learning the importance of DOMContentLoaded, and Callback fun

I occasionally include affiliate links for products I own and have found to be of good quality, or after checking reviews and feeling confident they are good products. These links don't increase your cost at all, but using them helps pay for this blog and the time I put into it. Thanks!

Being aware of how sites reel you in... and hook you 🎣

Do we really need cameras inside our homes? (Spoiler: NO!)

What happens to our online presence (digital legacy) when we die?

Why paying (and getting paid) for software is okay

Creating a "Simon" Game Clone on the Raspberry Pi

Check out what I'm up to

I write about whatever happens to be on my mind when I sit down. I'm a father of 5, developer by profession, and aspiring woodworker. I enjoy the Pi and other programming projects, as long as there's a purpose.   (read more...)

Support What I Do

It takes time to write a decent tutorial and answer questions from readers (but I enjoy it!), so if you found something helpful today and want to say "thanks", here's how. 😁

Buy me a coffee